It’s been a year and a half since June 2016 now. For Remainers, the pain of the referendum result is still fresh. I often wonder if Leavers still feel their triumph as vividly, with the same excitement, as they did that June morning. I know some Leavers, in my real life, but they’re mostly people I have an emotional connection to, and I don’t like to ask.

I suspect that, for many Leave voters, things aren’t really going to plan. Sure, we’re still on our way towards Brexit, but it’s hardly a proud march to taking back control. It’s a shuffling, dishonest, DUP-bribing, badly negotiated, farce. Theresa May, once finding strength in meaningful phrases such as ‘Brexit means Brexit’ and ‘Red, white and blue Brexit’ and delighting Leave voters with her apparent bloody minded (bloody difficult?) approach to enacting the ‘will of the people’ is now ridiculed by Remainers and Brexiteers alike. She is weak, propped up, perhaps held hostage by her divided party, perhaps honestly believing she can deliver Brexit. But she is a figure of disunity and it is truly bizarre that her New Year message suggested that people want her to stay in post. If so, it is only because no one can suggest an alternative at the moment – Corbyn might have benefited from the Remain vote in the last General Election but his support of the Government on most Brexit-related votes and issues, and his lack of vocal opposition to Brexit, makes him unpalatable to many, particularly centrism-inclined Remainers. The Lib Dems speak for Remainers, but they are still rebuilding, recovering, and the loss of Nick Clegg’s Sheffield Hallam seat, whilst cleansing  in many ways for a party struggling with the legacy of the coalition, was a loss of a high profile, eloquent and experienced spokesperson on Brexit within Parliament. So Mrs May clings on, claiming a mandate she does not have, and Remainers – and, it seems, Leavers – look on in dismay.

The reality is, we’re not getting a Brexit anyone really wants. Just as no one knows which version of this divided UK Mrs May is urging us to be proud of in the coming year. Remainers want no Brexit, or to stay in the Single Market and Customs Union at the very least. Leavers want a fantasy Brexit that never existed – only many of them don’t yet want to admit it. It’s a Brexit of nostalgia, driven by a myth of a ‘Great’ Britain (or Little England) that is not on an equal footing with the other nations of our continent, but is better than them, separate from them. It’s keeping all the benefits of membership but paying nothing, it’s keeping hard working NHS workers but not the migrants we don’t fancy having here. It’s restoring Empire and glory and it being OK to fly the English flag again without a fear of being accused of xenophobia or racism. It’s being able to offer an opinion with no facts because it’s grounded in real emotion – and this be validated by a national vote. The Leaver’s Brexit doesn’t exist because it is full of contradictions and no one can really tell you what it looks like. But it’s a hard fantasy for them to let go of, so much emotion and identity politics is caught up in it – as we see in the angry social media exchanges that often begin, still, with ‘we won, get over it’ with no clarity over what the prize is.

Of course, part of the problem is how many Leavers actually voted against the government, rather than for Brexit. Often, these people had very little knowledge of the EU or what Brexit might really mean. Often, they assumed Remain would win and therefore it would fine to vote in protest. It was a vote against Cameron, and the Remain campaign which focused on economic affairs in such a patronising tone of voice it was very easy to take against. It was a vote against politics and politicians (and the myth that the EU is even less democratic than our own Parliament played into this). We see this anger at politicians still – Nick Clegg’s knighthood triggered an outpouring of it from all sides. I campaigned on the streets in Nottinghamshire towns before the referendum and I would say that more people told me that they were voting ‘to stick it to Cameron’ or because they didn’t like being told what to do by politicians – and especially not foreign ones – than told me they were voting on reasons directly related to our EU membership. I’d say more people had issues with Cameron than they did even immigration, in my experience. These voters won the moment Cameron resigned. Beyond that, there was no plan. They can still crow ‘we won, get over it’ but they have even less idea of what they won than those who actually wanted Brexit. The pleasure of Cameron’s humiliation is surely fading fast. For those who thought their protest would be just that, because Remain would win regardless, they’re left on the side of the argument they never really agreed with anyway, and all the consequences that come with it. Or don’t. Because I suspect many of these are the people who now don’t talk about Brexit at all and post on social media that they’re tired of politics and we should all just post pictures of cats and mindful quotations instead. They’ve had their moment and now they’re disengaging again.

There are a lot of generalisations here, of course. If this year has shown one thing, it’s that generalisations are often misleading. There are divisions between Leavers, who voted for a myriad of reasons, and there are divisions between Remainers too – the fight between whether we should vote Labour, Lib Dem or Green, whether our campaigns should be well-mannered or sweary, whether music is an effective campaign tool, whether we should listen to Tony Blair or not, should we fight against any Brexit, or push for a soft Brexit, should we listen to Leave voters or dismiss them all as idiots (they often do themselves no favours on social media in this regard), do we like the idea of a federal Europe or are we simply pragmatic, but think the EU is deeply flawed? There are not really two camps on Brexit – Remain and Leave – there are a lot of individuals with a lot of different reasons for feeling the way they do. And tensions do come to a head, on both sides. Caught somewhere in this debate, of course, are the EU citizens in the UK and the British citizens in the EU, who begin a new year with little reassurance about their rights going forward. And the issue of the rights of British EU citizens is still barely discussed.

Still, the clock ticks towards our departure date. So what will happen in 2018? We have the interesting prospect of Lord Adonis emerging as a voice for the pro-EU, anti-Brexit campaign. Attacks from the Left and Right have come aplenty, but he seems not to be cowed by this. He has Tweeted that he doesn’t want to form a new political party, but perhaps he can help galvanise a united movement? Could Andrew Adonis – or perhaps someone else who will emerge imminently – be the voice the pro-EU groups have been lacking? We tend to hang on every word of the figures we’ve made our spokespeople, like James O’Brien and Guy Verhofstadt, relieved to know we’re not alone and have been heard. A strong UK-based political voice could be just what’s needed. We’ve seen the rise of the #FBPE hashtag on social media, to unite Remainers. It’s not without both controversy and trolls. But it’s a new development. As the stark reality of Brexit becomes more apparent – and the Government handling of it becomes increasingly farcical – the Remain voice is growing more confident. What will time pressure add to this? And can we manage confidence without self-righteous arrogance, which will never help the cause and which prompted some of the Leave votes in the first place? 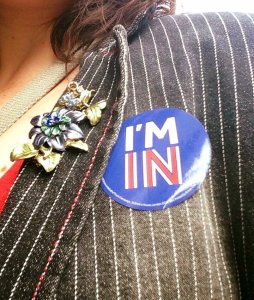 I’m intrigued to see what 2018 will bring and, dare I say it, more hopeful than I was at the start of 2017. I plan to keep blogging through the year. Over 2017, I’ve diversified the blog to include features on the various campaigns I’ve come across – to celebrate Europe, to fight Brexit, to find some common ground. Thank you to all who have taken part. I’ll continue to feature campaigners and their activities in 2018. But I am also really keen to get back to the original purpose of the blog, as in my first feature in 2016, to interview more Europeans – to capture your thoughts, feelings and experiences of Europe – Brexit, the EU and beyond. These are, without a doubt, interesting times for Europe. Let’s have a conversation about it.

Please drop me a line if you’d like to be interviewed for the blog, or know of a campaign I should feature. The only criteria is that you identify as European and are engaged enough to offer an opinion on culture, politics and the continent. I am really keen to hear from people in ‘mainland’ Europe too, of all nationalities.